"In every active community, there are necessarily disintegrating elements, due to the diverse works and interests of its members. Yet, the same spirit that guided the wheels of the mysterious chariot seen by Ezekiel (2 Kgs 2:11-12), the same spirit that moved the symbolic animals of such varied forms, one before the other, so that without ever pausing in their onward course, without ever retracing their steps, they tended to the same end, though by ways apparently most opposed to one another – that same spirit can so relate and bind all the activities of the members of [our] religious communities that no friction need arise. Regardless of the difference of employments, zeal for the glory of God will, by means of a pooling of efforts, bring about a union of hearts of which it is the bond and the strength." – Blessed Basil Moreau 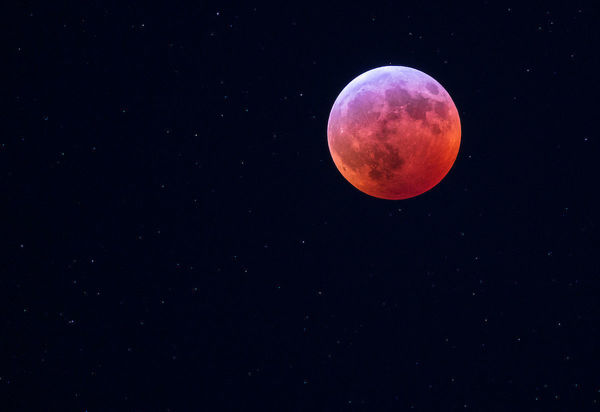 Just over a month ago, we were treated to a relatively rare kind of lunar eclipse. I am told the event is something known as a “super blood wolf moon.” While its name may sound like a heavy metal band’s first album, or perhaps a song straight out of a 1970s rock opera, the sight was quite arresting for those willing to brave the freezing temperatures of late January to catch a glimpse.

The type of eclipse that occurred this past January is actually the convergence of three distinct lunar phenomena: the “blood moon” (a stage in which the moon turns a dusty shade of red), the “wolf moon” (the traditional name for the January full moon), and the “super moon” (the time when the moon passes unusually close to the earth, thus appearing as its biggest and brightest). The effect of such a convergence on the moon made for a truly breathtaking image.

The occurrence of this “super blood wolf moon” also happened to coincide with this year’s candlelight prayer service commemorating the life and legacy of Dr. Martin Luther King, Jr.

I have always found this event moving, in the way that students, faculty, and administrators gather in the Main Building to unite in prayer, song, and a common thirst for peace and justice. Yet this year’s service, illuminated by the stunning eclipse overhead, was particularly so. It seemed fitting that as several distinct lunar phenomena converged above us to produce a stunning display of light and beauty, many luminaries of our campus community mirrored the same effect below. 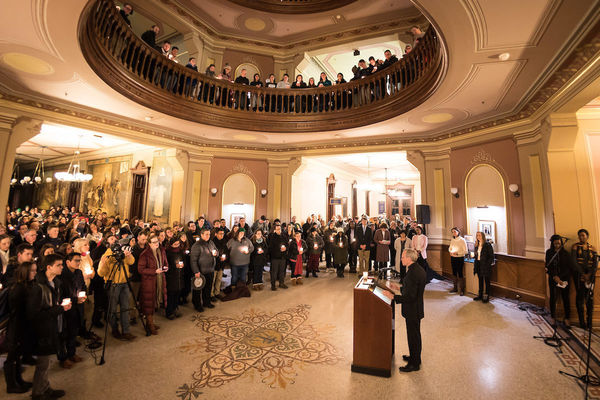 I recall looking around at those of us gathered from across the Division, and noticing how disparate and disconnected we must at times seem from the outside. What possible relation could the residence hall room selection process have to intramural sports? What does the Marching Band have to do with Graduate Career Services or advising the Competitive Video Game Club (by the way - does the Competitive Video Game Club need an advisor?)? In all our complexity and diversity of functions, expertises, and roles—from Community Standards to University Health Services to Campus Ministry—what holds it all together?

I sometimes wonder if Basil Moreau, who founded the Congregation of Holy Cross almost two centuries ago, had similar thoughts and questions about his fledgling community when he sat down to write letters to its members around the world. Some were running parishes or grade schools, some were serving as foreign missionaries, some were managing orphanages, and some were founding a small college in northern Indiana. He must have deemed this question important, for he used many of his letters, sermons, and meditations at the time to constantly urge the many disparate and far-flung members and enterprises of his community toward unity in their mission. In one such letter, he wrote:

What is true of a palace whose foundations have been laid and which is rising gradually until completion is verified, likewise, in a great work of charity. For in a great work of charity, as in the erection of a great building, it is not one alone who builds; nor is it one stone, or one single beam of wood, that forms it. On the contrary, each worker contributes something from his own trade; each stone is cut to fit into its one appointed place; and each piece of wood is arranged and placed so as to enhance the general effect of the entire building. Union, then, is a powerful lever with which we could move, direct, and sanctify the whole world (Basil Moreau, Circular Letter, September 1, 1841).

So what is that principle or unifying factor that holds our Division’s many (at times) diverging activities together? For us, there is an obvious common denominator here: the care, development, and well-being of our students. Despite our often varying functions, priorities, and focuses, our work is united in some way under this common mission. It is our zeal for this mission that compels us to leave the warmth and comfort of our homes to stand together on a freezing night in the dead of winter, as well as to work long, tiring hours supporting a student in need or pouring over spreadsheets and building Qualtrics forms. Our daily activities flow from this zeal, and teachers who possess it, as we know well and as Basil Moreau once told his own educators, fulfill the duties of their profession with enthusiasm, love, courage, and perseverance.

This virtue is so important, in fact, and so salient in the work that we in Student Affairs perform, that we identify it as one of the five foundational pillars of what it means to serve in a Holy Cross institution. These “Five Pillars,” which we call Zeal, Hope, Heart, Family, and Mind, are doorways into the particular spiritual, intellectual, and ministerial identity of the Congregation of Holy Cross. It is this tradition that inspires our work and gives it a meaning that has resonances beyond this world. It is a heritage that calls us to an experience of our work as a relationship with God that is so simultaneously life-giving, profound, luminous, and practical, that Basil Moreau could refer to the work of education as fundamentally a “work of the Resurrection” (Christian Education).

Moving forward, we as a Division will be offered many opportunities to engage with this heritage through discussion and reflection. This blog, in particular, which will be published monthly, will feature stories, reflections, and insights from colleagues across the Division. It is our hope that as we explore our Holy Cross heritage through each other’s stories, these stories will enrich our work and deepen our own personal and professional engagement with our mission. In so doing, we will, as Moreau wrote, become the kind of educators that “shine like the stars of the heavens for all eternity” (Christian Education).